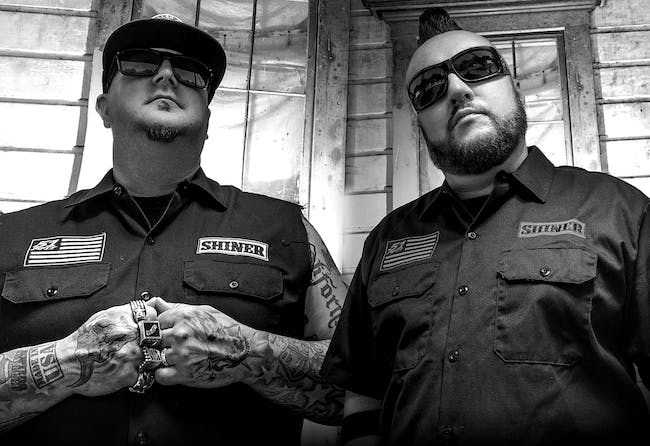 iCal
Google
SHOW IS 100% SOLD OUT. THERE WILL NOT BE ANY TICKETS AVAILABLE AT DOOR. Doors open at 8pm for those who have tickets.

Since their formation in Los Banos California in 2003 the Moonshine Bandits have continued a campaign of crossover genre-bending musical mayhem that appeals to the eclectic, color-outside-the-lines tastes of listeners, aka The Shiners, and they fiercely refuse to have their tastes confined and filed into categories. “Our musical style has always been full throttle and in your face,” says Moonshine Bandit Tex. Just like the rumrunners, bootleggers, smugglers and outlaws of old – the Moonshine Bandits provide a supply of the goods for the demand, defying the mandates and trends of mainstream pop culture.

The course of their career has seen ups and downs, hard partying and self-reflection. The Moonshine Bandits have crisscrossed the country performing hundreds of shows a year, ventured into branding their own beef jerky and moonshine, collaborated with some of the music business’s most prolific artists, outshined in the face of record industry roadblocks, earned a fiercely loyal fan following, and embrace the unconventional. Hell, they’ve even had the honor of friend and adult film legend Tera Patrick spicing up a music video! It’s all part of a journey filled with good, bad and even some ugly, but ultimately the Moonshine Bandit philosophy is summed up by Tex and Bird’s joint statement – “We always felt there aren’t stops or boundaries if you pave your own lane.”

And now the Moonshine Bandits have hit the proverbial motherlode with the release of Gold Rush on their very own record label MSB. Taking its inspiration from all that embodied the struggles and successes of America’s extraordinary era when dreams were being made while hunting for that elusive precious gem. It wasn’t entirely about the dollar sign though. The Gold Rush was far more dynamic in terms of the greater meaning and effect it had on all those who took part. Big or small, bust or windfall, for many people the Gold Rush ultimately provided the experience of building a new life in a wild place that had a code of its own.