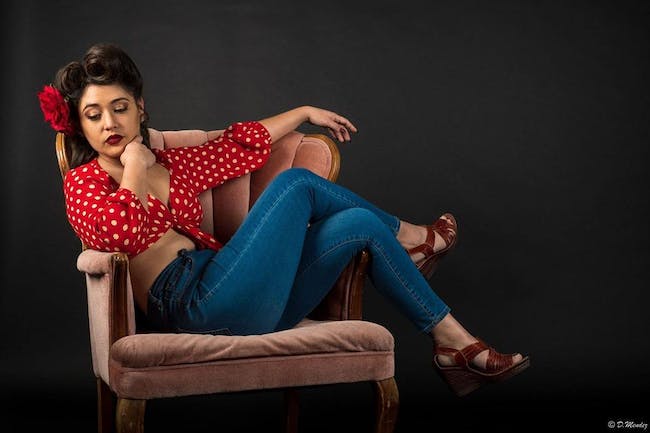 La Meria Candelaria is a female-fronted, cumbia-son solo project based in Los Angeles, CA. Stephani "La Mera" Candelaria's unique style is a light-hearted, vivacious mixture of tropical rhythms; sassy, humorous lyrics that deliver a powerfully feminist message that makes it unique and unforgettable. While the rhythms and bass lines suggest classic cumbia, the group utilizes a Cuban tres as the lead instrument, and dip in and out of classic salsa rhythms, lending to the group's unmistakable earthy, Caribbean sabór. The project was launched in summer 2017 by Bay Area musical transplant, Stephani "La Mera" Candelaria, who has been performing as front-woman/vocalist since 2008-- her previous groups include Tambores de Colombia, La Misa Negra, and Candelaria, and she has been featured as a collaborator/guest vocalist with Discos Resaca, Buyepongo, Viento Callejero, Tone Irie, and La Junta Collective. After moving to Los Angeles, Candelaria quickly put together a new project focused around her own original material, and began the process of creating a new, tasty sub-genre of Latin dance music.

La Diabla is an infectious rhythm, five faces strategically concealed behind sunglasses and bandanas, and is credited with creating an appetite for Colombian Roots Cumbia in Tijuana and its sister city of San Diego. This band stays true to traditional instruments such as the accordion, guacaracha, and caja valleneta. La Diabla translates to "The She-Devil," and will seduce audiences with Cumbia Sabanera throughout Los Angeles and Southern California and beyond.