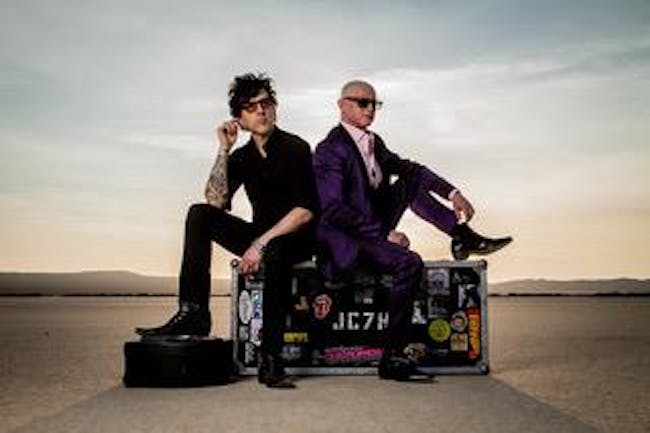 Brea Burns and the Boleros

“Youʼre never going to be as good as something you copy. So, we want to invent

our own space,” says Phil Leavitt, one half of the stalwart rock/blues duo 7Horse.

“And if you want what weʼve got, weʼre the only ones who have it.”

Formed in 2011 by Leavitt and longtime friend and musical partner Joie Calio,

7Horse has blazed their own trail across three well-reviewed albums: Let the

movie — The Wolf of Wall Street, which showcased the bandʼs left-of-center hit

enough for his movie,” says Calio. “That was the proverbial shot in the arm for us.

We weren't looking for it, but we had worked our asses off — sometimes stuff like

that comes to you."

But ever restless, the band has toyed with their musical formula on their new

album Superfecta. Written and recorded in the Hollywood Hills over a six-month

span, it marks a true sonic evolution for the group, and adds a few new voices to

“We started as a two-piece, blues-influenced, Black Keys-styled band, but we couldnʼt stay there,” says Leavitt. “We have all these influences. Iʼm a product of

growing up in Vegas, so I love showbiz, and I love rockʼnʼroll. To me, itʼs like Dean

Martin fronting the Stones. Is there room for that? We want to find out.”

In lieu of self-producing, the band brought in Grammy-winning mixer/producer

McCartney, Pink). “Heʼs mixed some of our stuff before, and heʼs a great

collaborator,” says Leavitt. “He has the same appreciation for the ‘60s and ‘70s

bands we like — and he cut his teeth as an engineer/mixer for a lot of R&B records,

so he gets the groove thatʼs part of our sound. And heʼs a great hang.”

As well, the band also started working with Brian Whelan, a multi-instrumentalist

who recently served as the guitar player for Dwight Yoakam. “Heʼs a great bass

player and keyboardist, and he really frees us up live,” says Calio.

For Superfecta, the group upended their unorthodox songwriting process. “We live

in two different cities, so we used to send each other lyrics and ideas, and finish

the song when we went into the studio, to create that last-minute spark,” says

Calio. “That worked for three records. This time, we did a lot of pre-production

and wrote for several months together. It was a conscious effort to up our game.”

The result is an expansive, daring take on 7Horseʼs blues-rock sound. Take the

thunderous opener “Victorious,” a foot-stomping anthem that plays like “We Will

Rock You” cycled through classic ZZ Top. Itʼs certainly a diverse record, but a

cohesive one: the spaghetti western vibe of “What Kind of Man” and sped-up

rocker “Broken String” (featuring Joie on lead) and the slow din of “Burn,” a song

written at 5 a.m. after Leavitt witnessed images of the 405 on fire.

money, love and the duoʼs relationship to music (hence the title, a reference to

betting on the four winning horses in a race). The album also touches upon the

frazzled state of our country — see the toe-tapping, what-do-you-believe first

single “What Is America.”

love playing in front of people. That inspires us.”

Interestingly, the group found great success touring with rather unexpected

musical pairings, including country/Southern rockers The Cadillac Three and blues guitarist Kenny Wayne Shepherd. “Those were great tours, and thatʼs the kind of

tour I want to be on.” says Calio. “Youʼre there to show up and change minds. I

For Leavitt and Calio, 7Horse marks the incredible evolution of a friendship and

into book writing, solo records and the Blue Man Group — starting when the two

dada. “Weʼve always been unified in thought,” says Calio. “We agree on almost

everything. And we know that even as we expand our band, the two of us will

always be the foundation.”